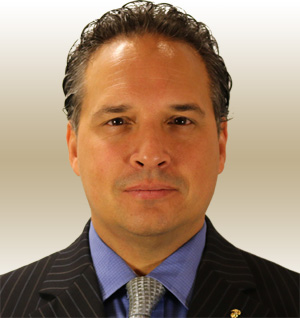 Dario D. Diaz was born in Tampa, Florida, on June 26, 1967. His father immigrated from Cuba as a political exile first seeking asylum in Venezuela. His mother was the child of Spanish immigrants and a lifelong resident of Tampa.

Diaz graduated from Tampa’s Jefferson High School and enrolled at the University of Florida. While attending the University of Florida, Diaz became active in the Naval ROTC program which ultimately resulted in his enlistment in the United States Marine Corps in 1987. He attended Marine Corps Boot Camp at Parris Island, South Carolina, where he graduated first in his Platoon, distinguishing himself as Honor Man. While in the Marines he received various awards and commendations. After Diaz completed his service he returned to Tampa but was reactivated to serve in Operation Desert Storm. Diaz received a Certificate of Commendation from the Commandant of the Marine Corps for his service and performance during Operation Desert Storm.

After completion of Desert Storm duty, Diaz began work as a computer field engineer for Medata, Inc. Diaz continued to pursue his educational objectives, contemporaneously receiving a B.A. degree in Economics and Finance and a B.A. degree in Government and Politics from the University of Texas at Dallas, both Summa Cum Laude. He continued his work as a computer field engineer acquiring technical skills and computer expertise in both the software and hardware areas. Upon completion of his undergraduate studies, Diaz enrolled at Baylor University School of Law. While at Baylor he was a member of the Harvey M. Richie Moot Court Society and was on the Dean’s List. He continued to refine his technical computer skills by writing a statistical computer program used by the Baylor Law School for pair matching mock trial competitions.

Upon completion of law school in 1996 Diaz returned to Tampa and entered private practice as a partner in the law firm of Fernandez & Diaz, P.A. Diaz is admitted to practice before the Supreme Court of the United States, the Supreme Court of Florida and the United States District Court for the Middle District of Florida. In 1997 Diaz participated in the representation of three alleged Cuban skyjackers, Adel Regalado, Jose Bello Puente and Leonardo Reyes, on the night before testimony began in United States District Court. At the conclusion of trial the three defendants were acquitted of air piracy. Immediately the Immigration Service proceeded with detention and removal proceedings. In a highly publicized case in 1998 the Immigration Court ruled in favor of the three men granting them political asylum and withholding of removal. The government appealed to the Board of Immigration Appeal. A massive appellate process was undertaken. In October of 2002 the Board of Immigration Appeals affirmed the decision of the lower court.

Diaz also assumed the representation of Jose Dionisio Suarez Esquival, implicated by the United States in the assassination of former Chilean Ambassador Orlando Letelier in Washington D.C. in 1976. During the process Suarez became entangled in the extradition proceedings of General Augusto Pinochet by the Kingdom of Spain and the ancillary investigation by the Republic of Chile. In August 15, 2001, Suarez was freed after nearly a decade of detention. Diaz walked Suarez Esquival out of jail. The photo grabbed headline news around the world.

Diaz later directed the successful defense in State of Florida v. Noe Ramirez, at one time identified as the individual that tossed a boulder off the I-75 overpass in Bradenton, Florida, tragically killing a well known and respected University of Alabama professor. In August of 2000, Diaz was asked to speak at DEFCON, the largest conference for computer security, cryptography and hacking held in the United States. His lecture dealt with the Digital Millennium Copyright Act (DMCA) and the legal aspects of the law. A Russian programmer and citizen, Dmitri Sklyarov, who was also a conference lecturer, was arrested by federal authorities for criminal charges stemming from the DMCA. In news stories the national media identified Diaz as the leading expert in the area.

In 2014 the Florida Bar named Diaz to the prestigious Florida Bar Technology Committee which is tasked with coordinating and implementing technology issues for all aspects withing the legal community. He has lectured in several Continuing Legal Education credit courses at various groups and local bar associations including the Tampa Bay Trial Lawyers Association, the Pinellas County Criminal Defense Lawyers, the Hillsborough County Bar Association, and the National Business Institute.